Simulator has several other noteworthy features. You may step both forward and backward through a simulation using toolbar buttons:

You may specify the number of steps taken when

Breakpoints may be set by either:

symbol is drawn on a model item when a break point is set. During a simulation run, whenever a breakpoint is hit, Simulator pauses immediately.

Tester may be used to generate a test suite (a set of tests) automatically from a Simulink / Stateflow model as shown in Figure 3.12. The tool identifies coverage targets in the model and aims to maximize the number of targets exercised by the generated tests.


This causes the window shown in Figure 3.13 to appear. If you specify existing test suites in the Preload Files section, Tester will execute those suites, then add additional test steps that exercise targets not covered by the preloaded suite(s). The second section (Run for) determines how long Tester should run. The third section (Coverage Objectives) lists the metrics which Tester will focus on. In the fourth section, you specify the name of the output file in which Tester will store the new test suite (Output File).

There are three options provided in the Run for section. The default option, as shown in Figure 3.13, is to run Tester for 20,000 steps. Alternatively, you may choose to run Tester for a fixed length of time by clicking on the top radio button in the Run for section, after which the steps entry box will be disabled and the hours and minutes entry boxes will be enabled. These values are added together to determine the total length of time for which Tester will run, so that entering a value of 1 for hours and 30 for minutes will cause Tester to run for 90 minutes. See Chapter 8 for usage details of the less-often used third radio button in the Run for section.

The Coverage Objectives section contains check boxes which are used to select the kinds of targets Tester will focus on while generating tests. Chapter 6 describes the different types of coverage tracked by Reactis.

To generate a test suite in the guided tour, retain the default settings and:

The Tester progress dialog, shown in Figure 3.14, is displayed during test-suite generation. When Tester terminates, a results dialog is shown, and a file cruise.rst containing the suite is produced. The results dialog includes buttons for loading the new test suite into the Test-Suite Browser (see below) or Reactis Simulator.

The Test-Suite Browser is used to view the test suites created by Reactis. It may be invoked from either the Tester results dialog or the Reactis top-level window.

A Test-Suite Browser window like the one shown in Figure 3.15 is then displayed. The Test Data tab of the browser displays the test selected in the button/dialog located near the center of the browser’s tool bar. The main panel in the browser window shows the indicated test as a matrix, in which the first column gives the names of input and output ports of the harness and each subsequent column lists the values for each port for the corresponding simulation step. The simulation time is displayed in the output row labeled “___t___”. The buttons on the tool bar may be used to scroll forward and backward in the test. The Test History and Suite History tabs display history information recorded by Reactis for the test and the suite as a whole.

The Filter entry box on the right side of the toolbar lets you search for test steps that satisfy a given condition. You enter a boolean expression in the search box and then select the filter check box to search for test steps in the suite for which the expression evaluates to true. For example, to see each step where the cruise control is active enter “active == 1” and then select the Filter check box.

The Test-Suite Browser may also be used to display the entire set of values passing over a port during a single test or set of tests.


A dialog similar to that shown in Figure 3.16 appears. In the figure, each value assumed by the inport drag is represented by a yellow dot.

Reactis Validator is used for checking whether models behave correctly. It enables the early detection of design errors and inconsistencies and reduces the effort required for design reviews. The tool gives you three major capabilities.

Assertion checking.
You can instrument your models with assertions, which monitor model behavior for erroneous scenarios. The instrumentation is maintained by Reactis; you need not alter your .slx file. If Validator detects an assertion violation, it returns a test highlighting the problem. This test may be executed in Reactis Simulator to uncover the source of the error.
Test scenario specifications.
You can also instrument your models with user-defined targets, which may be used to define test scenarios to be considered in the analysis performed by Tester and Validator. Like assertions, user-defined targets also monitor model behavior; however, their purpose is to determine when a desired test case has been constructed (and to guide Reactis to construct it), so that the test may be included in a test suite.
Concrete test scenarios.
Finally, you can place virtual sources at the top level of a model to control one or more harness inports as a model executes in Reactis. That is, you can specify a sequence of values to be consumed by an inport during simulation or test-generation. Virtual sources can be easily enabled and disabled. When enabled, the virtual source controls a set of inports and while disabled those inports are treated by Reactis just as normal top-level inports.

Conceptually, assertions may be seen as checking system behavior for potential errors, user-defined targets monitor system behavior in order to check for the presence of certain desirable executions (tests), and virtual sources generate sequences of values to be fed into model inports. Syntactically, Validator assertions, user-defined targets, and virtual sources have the same form and are collectively referred to as Validator objectives.

Validator objectives play key roles in checking a model against requirements given for its behavior. A typical requirements specification consists of a list of mandatory properties. For example, a requirements document for an automotive cruise control might stipulate that, among other things, whenever the brake pedal is depressed, the cruise control should disengage. Checking whether or not such a requirement holds of a model would require a method for monitoring system behavior to check this property, together with a collection of tests that would, among other things, engage the cruise control and then apply the brake. In Validator, the behavior monitor would be implemented as an assertion, while the test scenario involving engaging the cruise control and then stepping on the brake would be captured as a user-defined target.


After performing these operations, you now see a window like the one depicted in Figure 3.17. The three kinds of objectives are represented by different icons; assertions are denoted by a lightning bolt

, targets are marked by a cross-hair symbol

, and virtual sources are represented by

Validator objectives may take one of two forms.

Expressions.
Validator supports a simple expression language for defining assertions, user-defined targets, and virtual sources.
Simulink / Stateflow observer diagrams.
Simulink / Stateflow diagrams may also be used to define objectives. Such a Simulink subsystem defines a set of objectives, one for each outport of the subsystem. For assertion diagrams, a violation is flagged by a value of zero on an outport. For user-defined targets, coverage is indicated by the presence of a non-zero value on an outport. For virtual sources, each outport controls an inport of the model.

To see an example expression objective, do the following. 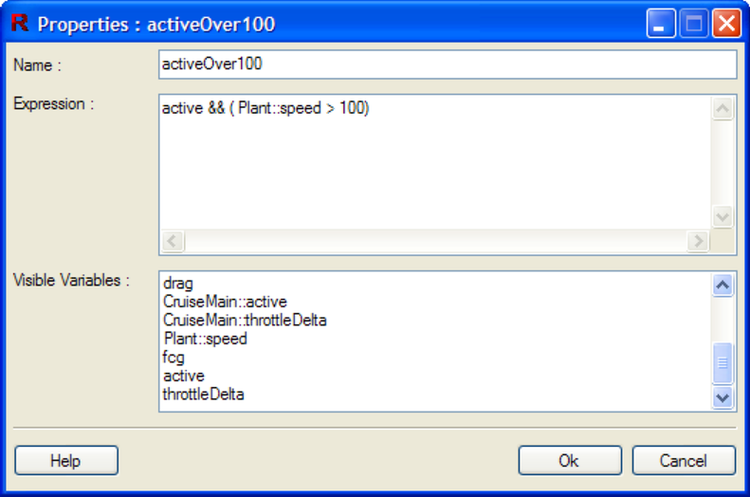 A dialog like that shown in Figure 3.18 now appears. This dialog shows an expression intended to capture the following requirement for a the cruise control: “Activating the brake shall immediately cause the cruise control to become inactive.” Note that the dialog consists of five parts:

To see an example diagram objective: 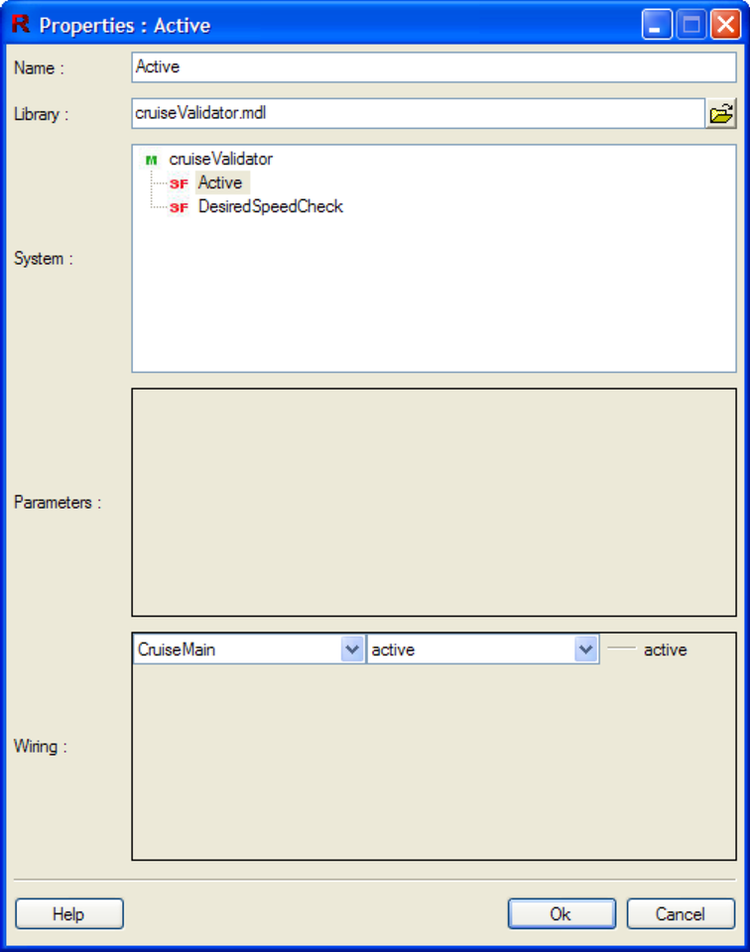 A dialog like the one in Figure 3.19 now appears. This dialog contains five sections.

Wiring information may be viewed by hovering over a diagram objective in the main Reactis model-viewer panel.

Diagram-based objectives may be viewed as monitors that read values from the model being observed and raise flags by setting their outport values appropriately (zero for false, non-zero for true). A diagram-based assertion in essence defines one “check” for each of its outports, with such an outport check being violated if it ever assumes the value zero. Similarly, a diagram-based target objective in essence defines one “target” for each outport; such a target is deemed covered if it becomes non-zero.

To view the diagram associated with SpdCheck:


These operations display the Stateflow diagram shown in Figure 3.20. This diagram encodes the following requirement: “While it is engaged, the cruise control shall not allow the desired and actual speeds to differ by more than 1 mile per hour for more than three time units.”

To understand how this diagram captures this requirement, note that the SpdCheck diagram has two top-level states, one corresponding to when the cruise control is active and one when it is inactive. The active state has three child states:

Note that the transition action executed as state Error is entered sets the outport ok to 0. This is how an assertion violation is flagged.

Diagram objectives give you the full power of Simulink / Stateflow to formulate assertions and targets. The objectives may use any Simulink blocks supported by Reactis, including full Stateflow. The diagrams are created using Simulink and Stateflow in the same way standard models are built; they are stored in a separate .slx file from the model under validation.

Diagram wiring is managed by Reactis, so the model under validation need not be modified at all. As this information is stored in the .rsi file associated with the model, it also persists from one Reactis session to the next. After adding a diagram objective to a model, the diagram is included in the model’s hierarchy tree, just as library links are. See Chapter 9 for more details on using Reactis Validator.

To use Validator to check for assertion violations:

A dialog like the one in Figure 3.21 now appears. The dialog is similar to the Tester launch screen in Figure 3.13 because the algorithms underlying the two tools are very similar. Conceptually, Validator works by generating thorough test suites from the instrumented model using the Tester test-generation algorithm and then applying these tests to the instrumented model to see if any violations occur. Note that when a model is instrumented with Validator objectives, the test-generation algorithm uses the objectives to direct the test construction process. In other words, Reactis actively attempts to find tests that violate assertions and cover user-defined targets. Validator stores the test suite it creates in the file specified in this dialog. The tests may then be used to diagnose any assertion violations that arise.

Note that if a model is instrumented with Validator objectives Reactis Tester also aims to violate the assertions and cover the user-defined targets.